augustus 03, 2013
Yesterday was the hottest day of the year 2013 to date. Temperatures reached 36 degrees C. Normal value for this time of year is about 24 degrees (according to KNMI).

I visited a local car repair shop specialized in Airco systems, Rene van de Louw, st. Oedenrodeseweg 40, and he quickly noticed that I had a leak in my condenser. How? He put some pressure on the system with nitrogen and I could hear a hissing sound coming from somewhere near my radiator. We also quickly checked with some soapy water for other leaks but found none.

The condenser would have to be replaced, good thing it was not the compressor, those things are much more expensive. He was very busy, so we decided that I would try to fix the problem myself. :-) (I never replaced an Airco condenser so that would be fun to try)

Since it was already past 17:30 I could not order a new one anymore that day.

Next day (yesterday) I visisted TC automotive (http://www.technischecentrale.nl/Best.html) at arround 9:30 and told them I needed a new condenser, 33 cm high. Since they did not have it in stock it would have to be ordered, the warehouse in Eindhoven had one. Come back at 11:30... today. (so soon, yes) 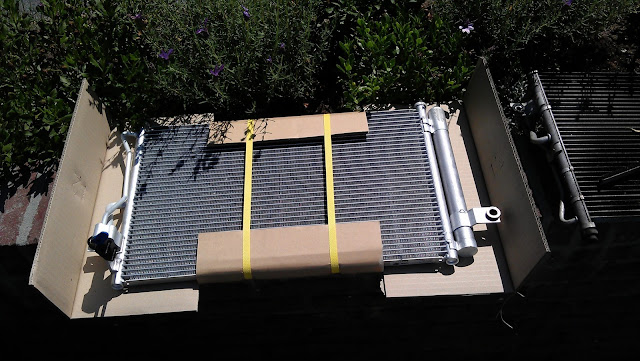 I drove to my workplace again, got my ratchet and socket kit out, and started figuring out how to replace this condenser. I was concerned that I might have to take the whole front end of the car apart, including the bumper but things were not that bad after all. 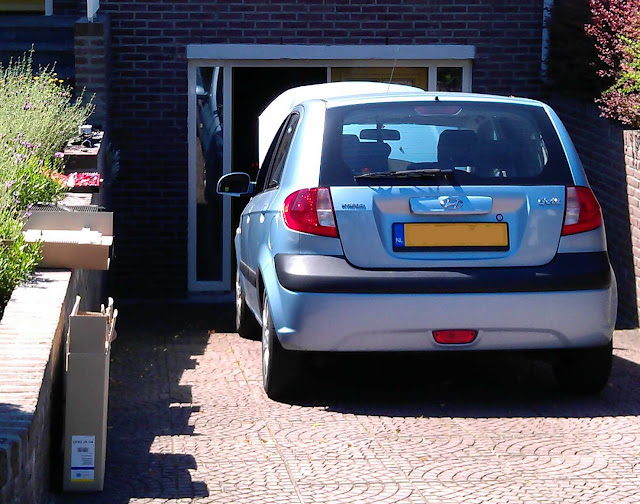 I had hopes to replace the thing without taking too much of the engine apart, so I tried to get the condenser out without taking the radiator out. It almost worked, the condenser came out, but it would be impossible to put the new one in the same way without damaging it, these condensers are very fragile aluminium and should be handled with care.

The picture shows the removed condenser, clearly not in the best of shape. 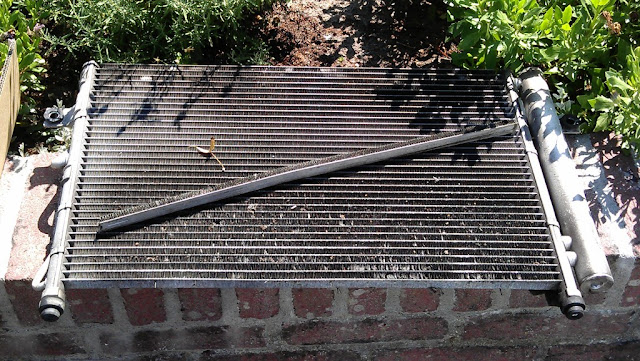 So after a big sigh I decided to take out more parts to make space for mounting everything properly.
I took out the radiator. Since I had never worked on this car before this took some time, but finally it was out. I was covered by engine coolant, but since temperatures were already around 35 degrees, the metal of the car was so hot it was impossible to work without gloves. I was not really upset about that, I took the garden hose and sprayed everything I needed to touch with water. :-)

The radiator was sprayed with water and compressed air before being mounted again. 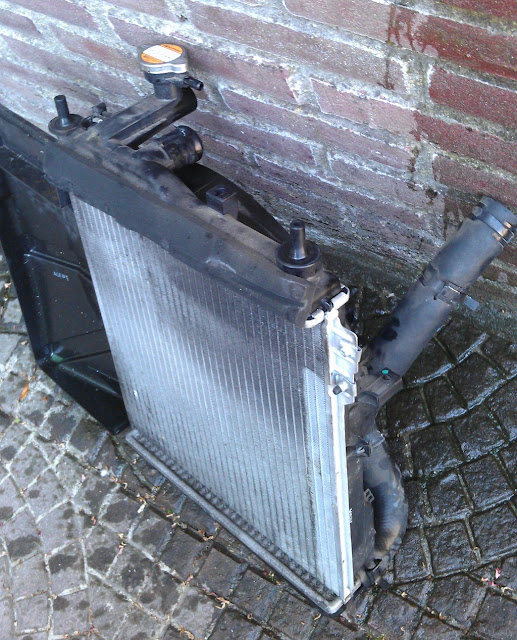 So finally I had the space to mount the condenser, it is in front of the radiator. I cleaned everything under the hood with water and compressed air and was happy how clean everything looked. 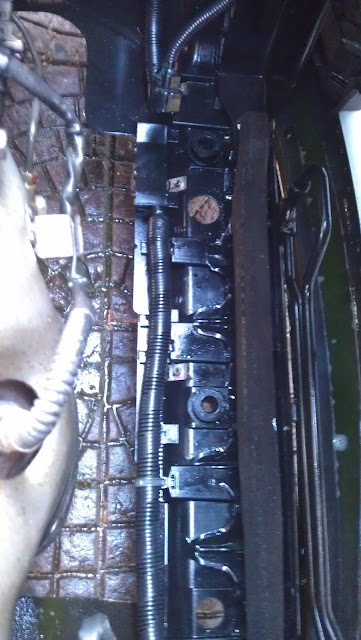 Now the time arrived to put everything back together. This was much easier, just putting stuff back in the correct sequence and making sure not to forget a cable or a bold.
First, the condenser is put in and bolded into place. Then the condenser is connected to hoses for the r134a flowing through them. ( http://en.wikipedia.org/wiki/1,1,1,2-Tetrafluoroethane )
I just read that r134a will be banned from cars in Europe very soon.
Oh well, things change, it is not as bad as R12 was for the ozone layer. 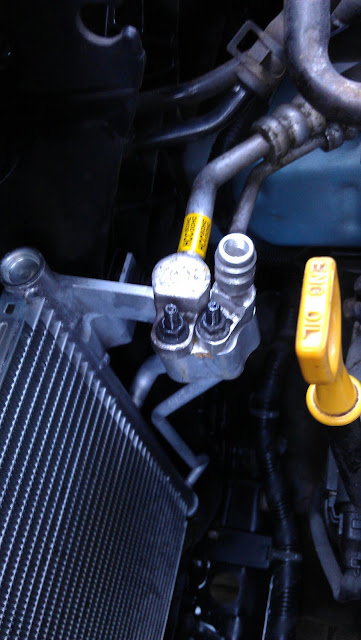 Now I just have to put the radiator back and I am done.
I did not make a picture of the radiator, but after a little fight with spring hose clamps everything was mounted very beautifully.
At that time I noticed that I had leaked a lot of engine coolant and that needed replacing.
So after filling the radiator up with a few liters (costing 12.95 Euro) using the direct fill lid (labeled, do not open when hot) things were fine here.

I also replaced the interior cabin filter (filter for the air coming into the car) like shown here :
http://www.youtube.com/watch?v=U8qE91L3T1g

Now the only thing to do is have a professional shop fill the AC system with r134a.
So I drove to Rene again and he hooked up the hoses, did a quick test with nitrogen to make sure no leaks were present and then connected the AC to his computer controlled AC-filler.
Type in brand and type, year of manufacture, and sit back for 20 minutes while we could follow what happened.
First the system was vacuumed, then pressure tested and finally filled with about 0.5 kg r134a.

Fired up the engine, pressed the AC button, oh that is nice, outside 36 degrees, inside at least a dozen less.
Everything worked, I am happy, pay the guy, away we are in a cool car. I have a whole new appreciation for AC systems now. Let's hope my wife appreciates it too ;-)

Can you tell me please, how did you take off the condenser hoses from the condenser? I took off the nuts from the bolts, but my hoses are still stuckt, and i can't disconnect them. Is there anything else that holds them down? Did you use any special tools? The picture with the connection that you have linked here looks exaclty the same as my.